In my previous post, we got our GitHub Actions pipeline set up and built our first Docker container image based on Caddy. In this post, we will be covering the process of automating the pipeline based on upstream changes in the parent Caddy Docker image. For this we will be deploying a service called Diun on a local docker machine.

Docker Image Update Notifier is a CLI application written in Go and is delivered as a single executable (and as a Docker image) to receive notifications when a Docker image is updated on a Docker registry.

Diun is a cool utility that watches a docker registry for updates and can run notifications based on them.

I will be running this series as if you were running on Windows 10/11 with Visual Studio Code installed. Now this series can also be followed fairly easily if you are running Linux setup or WSL. I am also assuming you have a general understanding of the command line interface. If you need more help, leave a comment below and I will reach out!

You should have these items created and set up before following this post.

Before we deploy Diun we need to setup the directory for Diun to house configuration files in. SSH to your Docker machine and run the following commands:

Your directory should now look like this tree output:

Now that we have our directory and file structure ready for Diun, we need to tell it what to do. First edit the config.yml file.

Add the following info to the file:

You can change the schedule to whatever you’d like. However, I would not recommend going shorter than once a day.

You can find more configuration docs on the Diun wiki.

CTRL + X then Y to save and close the file. Now lets edit the images.yml file.

Add the following info to the file:

CTRL + X then Y to save and close the file. Now edit the caddy.sh script file.

Copy the following info into the file. Make sure to edit the <TOKEN>, and <git_repo> (username/repo) portions.

You will need a GitHub PAT with both repo and workflows scopes enabled for the <TOKEN> section of the script.

CTRL + X then Y to save and close the file. Finally edit the docker-compose.yml file.

Copy the following info into the compose file.

Diun can be configured by environment variables instead of mounting host paths. See the Diun wiki for an example.

CTRL + X then Y to save and close the file.

Now that we have all of our config/script files configured we can start Diun. While in the ~/diun directory, run:

If you have an older version of docker compose installed, you may have to change the above command to docker-compose.

You can run docker ps to verify if Diun is running after the docker compose command completes.

Now that Diun is running, we can test the script to make sure its able to fire off our Actions pipeline. To make sure Diun can access the script and run it, we need to exec into the Diun container.

Note: If you are using an older version of Docker Compose you will need to change the container name to diun_diun_1.

Once inside the container we can navigate to the scripts directory and run the caddy.sh script.

If you get an error stating that curl is not found (similar to this) Tue, 05 Apr 2022 06:00:01 EDT ERR Script notification failed error="/scripts/caddy.sh: line 3: curl: not found: exit status 127" image=docker.io/library/caddy:latest you can install it by running: apk add curl --no-cache. Once installed re-run the sh caddy.sh command. Every time the container gets updated you will have to re-add curl.

With that, all we need to do now is wait until the Caddy base image updates! Here is what the container log looks like when Diun successfully initiates an update notification.

The log output shows Diun found an image update for Caddy which fired off our notification setup. In my case it ran the script to update my image, as well as post a notification to my personal discord server: 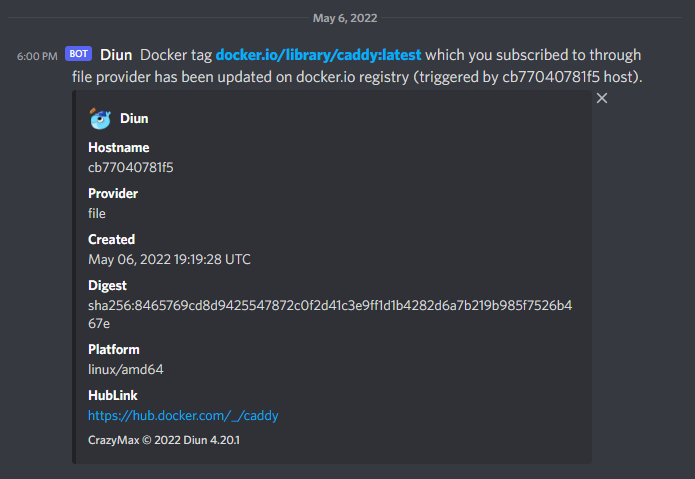 Let me know down below if you run into any issues and stay tuned for Part 3!

Thanks to my good friend Stefan for helping proof this post series!

FTC: Some links in this post are income generating.

I used to run a local Jenkins set up to automatically build and push my custom docker containers to Docker Hub. This was complicated to set up and maintain. Jenkins would sometimes throw errors o...

This is part 3 of this series so if you haven’t completed part 1 and part 2 yet, go back if you want to follow along. In this part we will be updating our Caddy pipeline to deploy updates from Ac...

Welcome to part 4 of my GitHub Actions post series. This part will cover how to build and release a binary version of Caddy from GitHub Actions. In part 1 we got our Actions pipeline up and build...